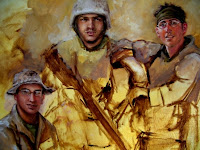 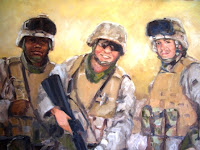 Last night I attended a local art league meeting where a wonderful artist from Westerville, Ohio, Anita Miller, spoke about plein air painting in Europe. She was funny, energentic and had lots of good ideas. Typical artist presentation.

Until she told us about her latest project to memorialize the 23 young men from Lima Company who were killed in Iraq in 2005. In October of that year, Anita woke from a dream to create this memorial. She is painting a life-sized portrait of each young man on 8 mobile panels.

Anita has the support of the soldiers' families and the Marine Corp, but she has no formal funding. Her faith in a higher power has moved her toward her goal with each need being met by the generosity of others.

Anita has assembled a team to help her complete this project and with their help, she hopes to be able to have it on display by late 2007.

Those who know me well, know that I have never been in favor of this war. However, like most in my position, we do care and support the young men and women who serve. I have a 20 year old son whom I adore. I can not begin to imagine the pain and loss these families and comrades have and do deal with daily.

Anita says this memorial is for the moms, dads, brother, sisters, grandparents and all relative of these boys. But most importantly, to also honor their brothers in arms from Lima Company who are still suffering from this war.

Posted by Rhonda Bartoe Tucker at 8:54 AM

Rhonda Bartoe Tucker
I am a working artist living in Central Ohio. My current areas of interest are oil painting and colored pencil drawing. 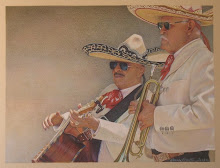 Available at My CafePress Store 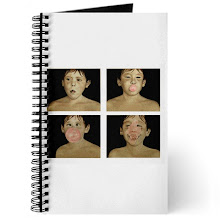 Blogs That Make Me a Better Artist

Unless otherwise attributed, all paintings, images, and writing on these pages are my exclusive property and are protected under United States and International copyright laws. You may not use the photographs, downloaded copies of my drawings, paintings, or written words, you can not reproduce them, copy them, store them or change/manipulate them in anyway without my expressed written permission.